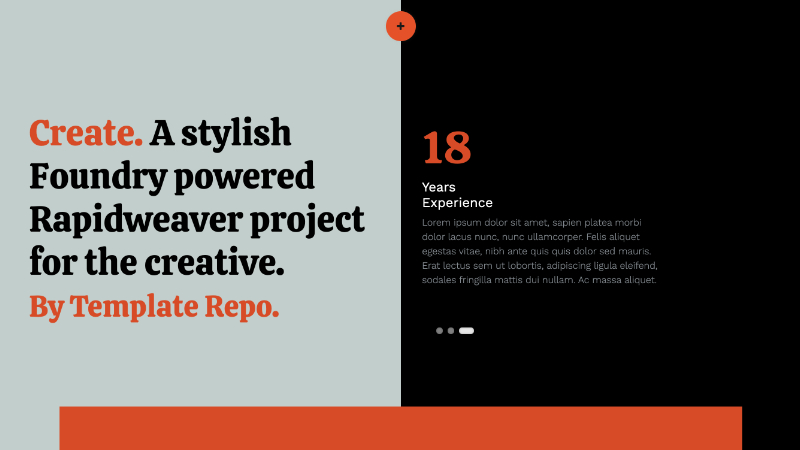 Create was started some weeks back. It was meant to be released around the middle of the month, but just as it was nearing completion, Elixir released the Shutter and Flux stacks which seriously impressed me. So much so I decided to give Create a re-build to add in some optional extras to cover these new stacks.

Flux is a really easy to understand CSS grid stack. I've tried to get along with CSS grid stacks in the past and failed. Flux "clicked" with me, though.

There are now two versions of the homepage in Create; one including Flux, the other with a similar design but using the regular Foundry Grid stack.

Shutter is a gallery stack, not too dissimilar to the other gallery stacks on the market, but with one big difference; Shutter supports the usual drag and drop approach to populating your gallery. Plus, the ability to "read" an image folder on your server and create the gallery from it. This process Shutter calls a "batch" gallery.

What set's this "batch" approach apart from the others is that Shutter will auto-create thumbnails for any image to add to your main image folder. This is a killer feature, in my opinion.

As such, I wanted to include Shutter in Create, even though it's not a "gallery" focussed project. So I've added in two additional "bonus" pages: A gallery page powered by Shutter and a file manager page.

To exploit Shutters "batch" gallery feature, you need to add your images to the image folder on your server. Easy enough if you are familiar with FTP and have a suitable app. Not so easy if not. Many are nervous about using FTP apps, with good reason; the potential to seriously mess up your server folders, and so your website, is high once you start playing around with FTP.

I'm a big user of PHP script and knew there would be a script available to make the process of adding images to a server folder easy, mostly foolproof and above all else, entirely within the browser: NO FTP app needed!

After a few days of research, I settled on an excellent and well-respected script called Tiny File Manager. and after some customising, set it all up as a single Rapidweaver "code" page inside Create, that will auto-install itself into the "batch" folder that Shutter creates when you first visit the page with Shutter on it.

The only thing the user (you) needs to do to the PHP script is change the password, then boom: You have a super simple way to get your images into (and out of) your Shutter batch folder.

However, it must be stressed that Tiny File Manager is open source and from an unknown developer. I'm not a PHP coder, so I do not vouch for its security and trustworthiness. It has excellent online reviews, so I'm comfortable using it myself. It has a few security issues listed on the support site, but nothing appears "mission-critical", plus the dev seems very active in maintaining the script.

Nonetheless, you use it entirely at your own risk!

Think of Repository as Tiny File Manager on steroids. Packed to the max with features and build from the ground up for Rapidweaver.

If you are nervous about using PHP Scripts, hop on over Repository 2 and get it bought. Create ships with a fully setup Repository 2 page. So once you have purchased the stack (and installed its companion theme, Blankstrap5), you're good to go.

30% Off Repository 2 for all Create Customers

Inside Create, you will get a unique voucher code to get 30% off Repository 2 for a limited time. So fill yer boots!

Create contains an awful lot of features, not to mention the file manager page, so I've made a quick video to give you a run-through. Remember: I'm not a video maker, so it's a bit rough. But you'll get what you need from it, hopefully.

You can buy Create here and see the full demo here.

Disable All
Enable All

Essential CookiesThese cookies are strictly necessary and always on by default.
Required to allow the site to work correctly. All essential cookies are anon. Most automatically expire once you end your browsing session.
Show Cookies
Matomo AnalyticsEnable or disable Analytics Cookies
These cookies allow us to count visits to our site and traffic sources.

All the information collected is anonymous and not shared with any third party.
Show Cookies
Online StoreEnable or disable Functional Cookies
Our online store and payment processor, Stripe, must set some cookies.
Show Cookies
Cancel
Save & Close